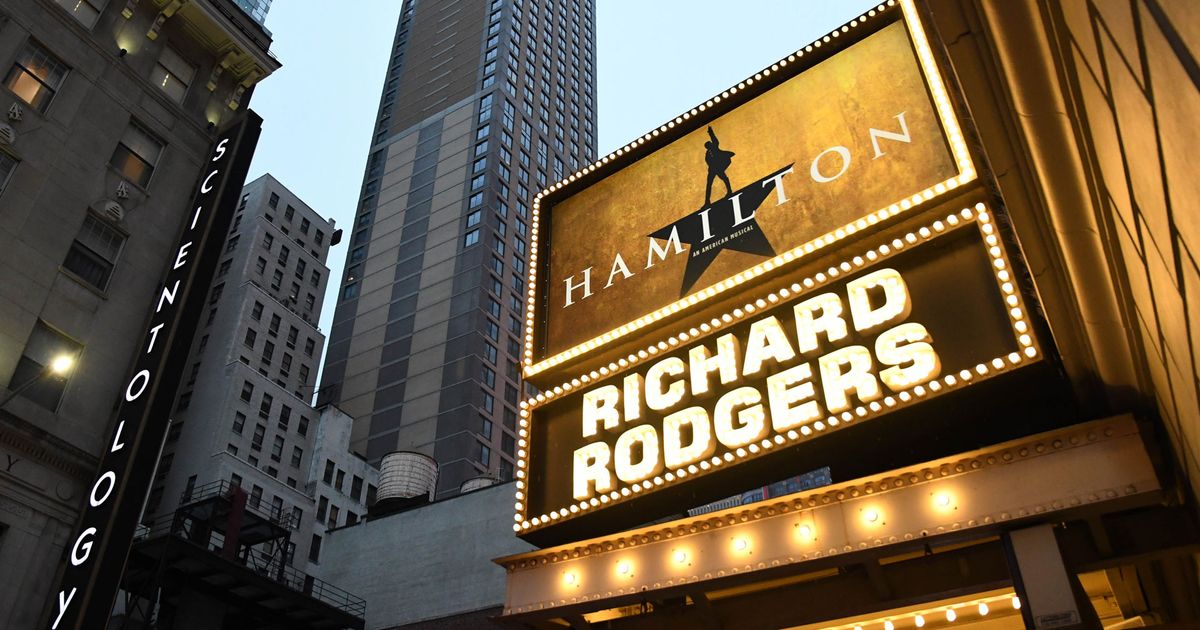 'Hamilton' is coming to Disney+ way, WAY ahead of schedule

Disney is not throwing away its shot to make an Independence Day splash in the midst of a global pandemic. Lin-Manuel Miranda and Disney boss Robert Iger confirmed that Miranda's beloved Broadway hit Hamilton will be coming to Disney+ on July 3. That's this J… 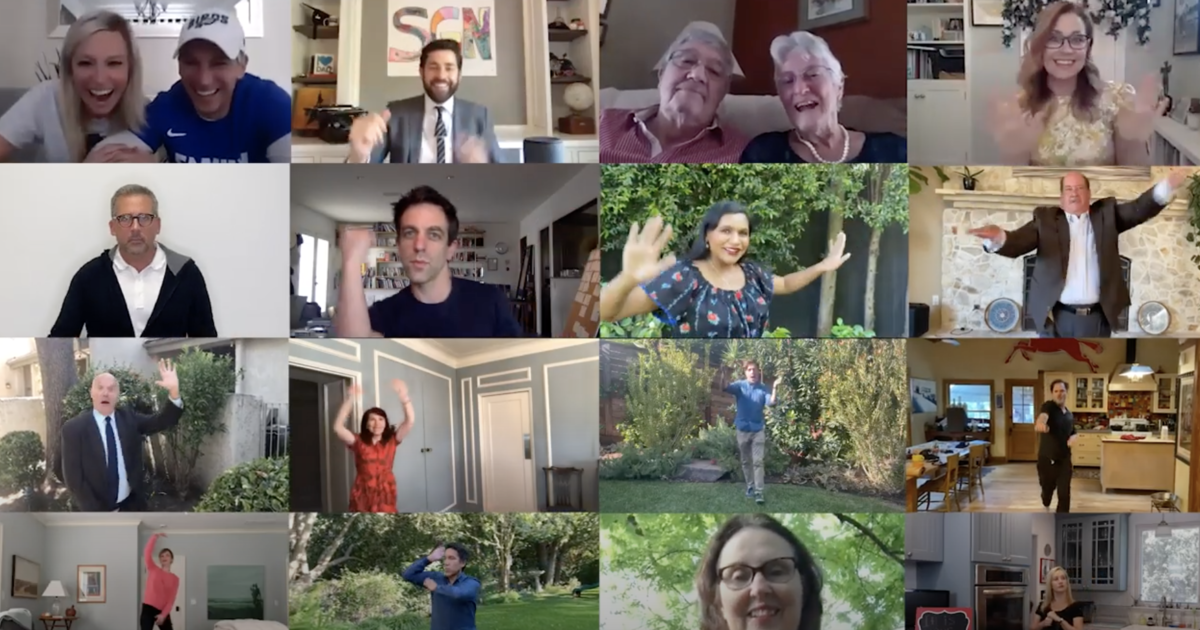 The couple got engaged at a gas station just like Jim and Pam — so John Krasinski helped them tie the knot in a memorable way.

Get ready for the nacho showdown of the century. On May 15, Guy Fieri and Bill Murray will face-off in a nacho showdown judged by Shaq and, sure, that sounds like an insane word salad, but what the hell — it's a pandemic — NACHO SHOWDOWN, LET'S GO! A press re…

John Krasinski was joined by Steve Carell, Jenna Fischer, Ed Helms, and many more on Episode 7 of Some Good News.

Who says graduation can't happen online? Liam Payne, Oprah Winfrey and more stars are going to give the Class of 2020 a virtual send-off.

The first few months of 2020 have been absolute trash, but they've also made people far more appreciative of good things in the world. For today's piece of good news, we're happy to announce that there's been yet another virtual reunion between former co-star…

John Krasinski hosted a virtual senior prom and it was epic

Not only did John Krasinski host a virtual senior prom, he was the DJ too.

In early seasons of The Office, Michael Scott is an unprofessional, largely problematic boss. As the series progresses and fans learn more about Michael's past and core values, however, it's hard not to feel for the guy every once in a while. On the latest ep…

Actor John Krasinski, David Ortiz and AT&T surprised a group of healthcare workers in Boston with a surprise trip to Fenway Park to throw out the "first pitch" of the 2020 baseball season...

Mindy Kaling says she gets to "redo my maternity leave" while self-isolating with her two-year-old daughter, Kit, during the coronavirus pandemic.

John Krasinski has launched a YouTube channel in an effort to bring some good news stories to people who are looking to distract themselves right now. The first episode has more than 3 million views and includes an appearance from Steve Carell.

John Krasinski And Steve Carell Virtually Reunited To Celebrate "The Office," And I Can't Stop Smiling

"Just to see your face is so great."

John Krasinski launched a YouTube show titled "Some Good News" sharing positive stories of the week. His co-star from "The Office" Steve Carell joined him on the first episode.

John Krasinski and Steve Carell talked about 'Jim face' and 'The Office' memories during Krasinski's online show about good news on Sunday.

Who are you supposed to sing 'Happy Birthday' to when washing your hands?

This morning I sang "Happy Birthday to You" to myself in the bathroom even though it isn't my birthday. It felt wrong. I was washing my hands, as I've done approximately 50 times over the past two days, because I've now joined the masses of paranoid people wo…

I've spent 26 years of my life not caring much about cars, but today? That's all changed. Well, to be clear I'm just obsessed with this one Hyundai Super Bowl commercial about a remote smart parking assist feature, that stars two of my favorite Hollywood acto…

The NFL 's biggest game of the year is finally here. Super Bowl LIV, the highly-anticipated battle between the Kansas City Chiefs and San Francisco 49ers, will be televised live from Hard Rock Stadium in Miami on Feb...

Director John Krasinski doesn’t rule out the possibility of doing A Quiet Place Part III in a new interview.

They might have told one of the greatest love stories put to screen but there is no love lost between John Krasinski and Jenna Fischer when it comes to the sporting field.

Ranking Every Single Jack Ryan from Worst to Best - IGN

Tom Clancy's bookworm action hero Jack Ryan has been played by some of the biggest movie stars in history. Now, as John Krasinski takes on the role on the Amazon series, we determine whose version is the best!

apparently i live in the neighborhood of john krasinski & wife, and peter dinklage .. who woulda thought https://t.co/IlxwsjnRe0

still cry over the lyrics in harvest moon like Emily Blunt and John Krasinski danced to a love song... together... in a film...

If you dont find john krasinski hot block me

My main focus is always to try to be myself first, and then, hey, if I wear a cool jacket, that’s a bonus. – John Krasinski https://t.co/57KS2c0bcb #prisonjacket

My main focus is always to try to be myself first, and then, hey, if I wear a cool jacket, that’s a bonus. – John Krasinski https://t.co/ob6hv45Uza #prisonjacket

y'all john krasinski is the perfect reed richards https://t.co/uJu3PGbw2g

listen, i love it's complicated, but nancy couldve done better in the casting of the men in this one.. john krasinski can stay but that's it https://t.co/KkJWfW1pNj

Who is Randall Park? John Krasinski plays Jimmy Woo in the MCU. https://t.co/tyQ9Is925l

RT @616danvrs: galaxy brain is wanting john krasinski and emily blunt as reed richards and sue storm in the mcu 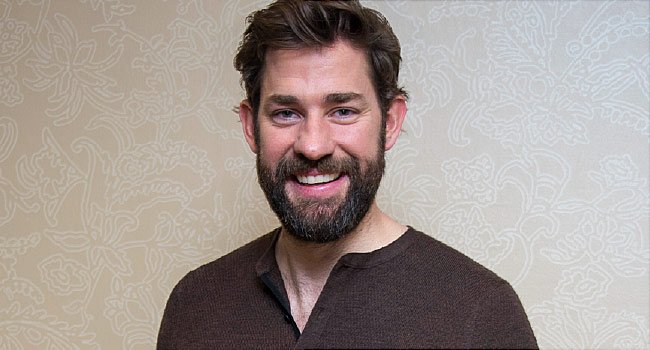 John Krasinski and Emily Blunt should be casted as Reed Richards and Sue Storm if Marvel plans to make a Fantastic 4 movie/show.

RT @troyoboyo17: SPOILERS FOR A QUIET PLACE *John Krasinski dies to save the kids* My gf: "Did he seriously just leave her alone to take c…

SPOILERS FOR A QUIET PLACE *John Krasinski dies to save the kids* My gf: "Did he seriously just leave her alone to take care of FOUR kids by herself wtf"

Not Mr. Fantastic, it's for John Krasinski, claiming it. https://t.co/MXFShMj6XD

I have never watched a single episode of The Bachelor. But I might be willing to take a peek if that knock off John Krasinski is a main focus, not gonna lie. https://t.co/Tyr2MEVvWW

Okay but like Derek from #BachelorinParadise looks like John Krasinski. Plz tell me I’m not seeing things??? https://t.co/l31TsCVre1

me: isn’t john krasinski married to emily blunt? sam: oh i didn’t know that. isn’t that the one from girls aloud me: you what sam: you know the one that sang downtown me: sam: me: sam: me: that’s emma bunton