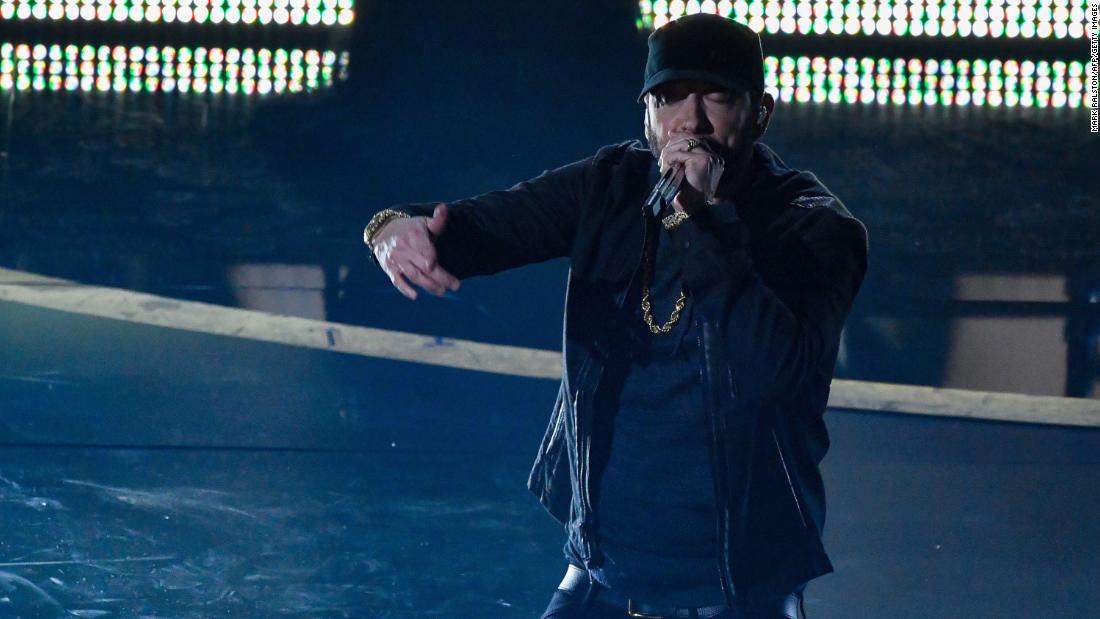 Hip-hop star Eminem wants fans to match his impeccable flow with their own rapping skills.

Jane Fonda is done with plastic surgery: 'I have to work every day to be self-accepting'

Jane Fonda is getting candid about going under the knife. The actress and activist, 82, opened up about plastic surgery in a new interview.

We now know why Eminem performed at the Oscars -- sort of

The rapper told Variety that the Academy asked him to perform "Lose Yourself" live since it was already in the Original Song montage. Since he skipped the 2003 ceremony, when he won an Oscar, he said yes. And he had fun!

Idina Menzel's priceless reaction during the 2020 Oscars made a pretty great meme when you combined it with the night's tribute to Cats.

The 92nd Academy Awards offered a music-propelled celebration of film that — despite no host, comedy sketches or bits — still ran long. The glitzy show was a mixed bag of historic upsets, left-field surprises, heartfelt words and widely expected wins.

Eminem performs at the Oscars 17 years after winning award

The rapper left many people confused with his surprise performance of "Lose yourself" from the movie "8 Mile."

Lin-Manuel Miranda introduced a song medley at the 92nd Academy Awards, and it appeared it was just another compilation of songs in movies that have had an impact.

Look, if you had ANOTHER shot...

Oscars 2020: Stars confused by Eminem’s performance at the Oscars

Idina Menzel is all of us.

A lyric from 'Darkness' reads: 'Finger on the trigger, but I'm a licensed owner with no prior convictions, so loss, the sky's the limit'

Eminem is getting criticism for lyrics in the song, "Unaccommodating," off his new album, "Music to Be Murdered By," that appear to make light of the 2017 Manchester Arena bombing that killed 22 people.

Left-wing rapper Eminem released a new album on Friday, which features the song "Darkness," which pushes hard for gun control and the song's video encourages viewers to register to vote for candidates who will subvert the Second Amendment.

Eminem review, Music to be Murdered By: Rapper's bitter diatribes show he is incapable of moving on

It stands to reason that Eminem would align himself with Alfred Hitchcock, the director who supposedly inspired this album – they share an active distrust of women

Rapper's album, "Music To Be Murdered By," has video for one track that allude to the 2017 mass shooting at a music festival in Las Vegas

"What you said was hurtful to so many people," fans tell the rapper.

The rapper has just released a surprise new album, Music to be Murdered By

Rapper released a surprise album that includes the track ‘Unaccommodating’, on which he references the 2017 attack that killed 23 people and injured hundreds more

Here's how A-list stars like Taylor Swift, Justin Bieber, and Rihanna could get caught in the middle of the ongoing US-China conflict

Universal Music Group's parent company, Vivendi, is considering selling a portion of the music label to Tencent, a China-based social media and Internet company. The deal could be subject to review by a US committee that examines business investments for pote…

15 of the most controversial songs by popular artists

The singer, 28, revealed the tracklist for his forthcoming new album on Tuesday, and it includes collaborations with Cardi B, Eminem and Justin Bieber.

RT @JoParkerBear: I saw Eminem in concert back in ‘98. Nice to see him grown up, using his voice for something good: a shout-out to Heather…

I want eminem to suck on my fat anxiety

RT @DagreatjerbearE: @kingblitzmusic Most eyes will be Eminem but I like to see you react to rez. Maybe go old school. No snakes in my circ…

I know it’s coo to hate on Eminem, but Stan is a CRAZY good song. That’s some top tier writing.

If Eminem and Big Pun ain't in your top 5 lyricist of all time man gtfoh.

RT @limjaebeomie: majority are just appreciated because of the fast speed of their rap (which in itself is their own quality) and the rest…

Eminem: "Hey, it's me, Versace! Whoops, somebody shot me! And I was just checkin' the mail, get it? Checkin' the male?" Us, at the dawn of a new millennium: "this is a genre-defining lyricist at his best."

I dont agree with him politically but his talent is undeniable. A freestyle from @Eminem that will hurt your brain. He just spills out his mind...and its amazing. No matter your personal feelings on him or his ideology this is (in any term) just sick. https://t.co/vghntIX7KX

"Just gonna stand there and watch me burn. That's alright because I like the way it hurts" - Eminem feat. Rihanna

Eminem - Lose Yourself https://t.co/yAC8NkAxsF via: Since the battle for Stalingrad it's never one shot! Hack is, cooking the spaghetti my self. This e-rap is brought to you by the friendly AH-64-Longbow promoter. Hi @LockheedMartin, how is the AH-69-PAINTBALL development going?

"Just gonna stand there and watch me burn. That's alright because I like the way it hurts" - Eminem feat. Rihanna #Quotes

"Just gonna stand there and watch me burn. That's alright because I like the way it hurts" - Eminem feat. Rihanna

RZA, Tech N9ne, Eminem, Xzibit, Pharoahe Monch, Kool G Rap, Chino XL, KR... https://t.co/pNVTzzBCOR via @YouTube @djvlad 20yrs ago Em was already established and validated by the culture. His not white no more he is HipHop. As a LYRICIST he is up there .

RT @chartdata: .@Eminem's 'The Slim Shady LP' has now sold over 1 million units in the UK.

RT @chartdata: .@Eminem's 'The Slim Shady LP' has now sold over 1 million units in the UK.